Showing posts from October, 2013
Show all

Fibromyalgia solved; A pathology, not in the mind

October 27, 2013
Fibromyalgia solved; A pathology, not in the mind
Read more

Fibromyalgia and the Workplace

October 25, 2013
Having a great work ethic is a wonderful trait to have.  It makes you a great asset to the company and can even lead to better promotions and pay.  But just how much is too much of a good thing?  Especially when one has Fibro? Before diagnosis, I used to be a workaholic and spend every waking moment at my job.  And sometimes those moments were sleeping ones for my boss.  Yup, I used to be asked to stay over-night so I could get things done .  This was especially true during the Christmas set-up season.  I stayed and really didn't complain.  Why?  Well, for the same reason that most have, I was afraid of getting fired or being looked over for a promotion. These hours didn't bother me so much in the beginning.  In fact, I used to pride myself into thinking that I could do more than the average person since I didn't require as much sleep.  But after about 9 months of only sleeping 2-4 hours a night, my body get ticked off.  What can I say?  I was young, fresh out of colleg
Read more

October 24, 2013
I thought I'd share this to let everyone know about this wonderful neurologist that dedicated her life to helping people in pain.  She helped many, including people with Fibromyalgia. http://www.post-gazette.com/news/Death-Notices/2013/10/24/Area-neurologist-devoted-to-helping-people-manage-pain/stories/201310240174 Stay fabulous! Love and friendship, Kimberley
Read more

The Art of Housekeeping While Having Fibromyalgia

October 17, 2013
Housekeeping, or rather, clearing/picking up the clutter is a very daunting task for the healthy, but it's about 50 times worse when you have to do it with a disability.  Seeing everything in disarray can, at least in my case, cause Fibro Fog, flares, and even panic attacks. Before my diagnoses I was a neat freak and could probably keep up with Adrian Monk.  I was obsessed with things being orderly, because frankly, it just made my life much easier.  I didn't have to wonder where the kids' mittens were because they had a place, just like the flatware does in the kitchen.  But over the years I've had to let go of things because of my illness.  It was hard.  I used to have a Vulcan Death Grip over the house.  I've gotten a little better, but not much. Housekeeping is such a touchy subject with us Fibromites because we NEVER want to be compared to someone who is dirty or lazy since we are neither of these kinds of people.  We have this notion in our heads that our
Read more

October 14, 2013
I must admit, this is not a topic I really wanted to discuss.  I get embarrassed about it because I feel I should be more careful, and yet, it happens.  I am a danger prone person.  I sprain, strain, and bruise myself quite easily. The falling is probably the worst because I tend to trip over my own two feet.  I fall down the stairs.  I fall on ice.  I loose balance and can even trip while walking on level ground.  I have sprained everyone of my fingers by doing various tasks or sports.  I've thrown out my back and hamstring dancing and in gymnastics.  I've even sprained a toe and given myself a black eye at work. Why?  I think I'm a klutz due to my Fibromyalgia.  I get tired and when my muscles feel weak, or I'm in a Fibro Fog, things happen.  I've been danger prone all of my life which is why I believe that I've had Fibromyalgia all of my life and why I truly believe it is a disease and not a syndrome.  I believe the disease does become progressively worse
Read more

Cindy Stewart Author of Your Fibromyalgia Diet: Eating Your Way to Better Health 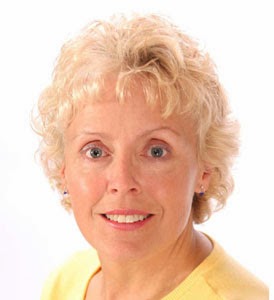 This blog posting is on an interview I conducted with a great gal who also suffers from Fibromyalgia.  Her name is Cindy Stewart.   She was a nurse practitioner and licensed massage therapist for most of her career.  Now, after retiring, she inspires health conscious individuals.  She currently has a new book out for Fibro sufferers entitled Your Fibromyalgia Diet: Eating Your Way to Better Health.   F&F :  What made you decide to write the book Your Fibromyalgia Diet: Eating Your Way to Better Health ? Cindy Stewart : Since there is still no known cause or recognized treatment plan that works for everyone, many fibromyalgia survivors have turned to diet as a way to relieve some of their fibro symptoms. Studies have proven that diet plays a significant role in treating fibromyalgia. Unfortunately, it's not the same diet for everybody; not everyone is helped in the same way. There is little evidence to support any single diet as a way to deal w
Read more
More posts