I've been cooped up in the house since Friday due to the Blizzard of 2013 and I got a little creative in the kitchen today.  My wing creation idea came to me because I had been running low on food choices due to the lack of being able to get out, AND, I had a lot of two things in the fridge-- Coconut Spread and Limes.

I'm not a stranger to this combination.  I've used store bought marinades with it before for fish, particularly salmon, but this was my first attempt with chicken.  It was also my first attempt at making this marinade from scratch.

I must say that I was a little leery in the beginning.  I have picky eaters here at home who are content with a store-bought palate.  But I thought I'd go ahead and try it anyway and I'm glad I did!  This recipe got a 4 out 5 rating-- unless you count the dog-- then it's 5 out of 6.  The little one didn't like it, but all the big ones did so it's worth a shot. 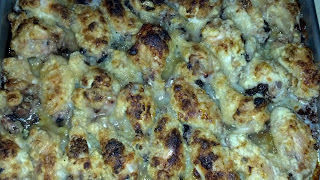 1 Juice of a Lime and its zest
1 and ½ tablespoons brown sugar
*8 tablespoons coconut spread (melted)
1/8 teaspoon of paprika
1/8 teaspoon salt
dash of pepper
a drizzle of olive oil
flour for dusting wings
3 pounds of chicken wings
*One to try is Earth Balance Organic Coconut Spread (Yes it's Non-GMO).

Preheat oven to 425 degrees.  Place some flour in a bowl for dredging the wings.  Set aside.  Zest lime and then add its juice to a small bowl.  Set aside.  Place coconut spread in the microwave and heat until melted.  Microwave ovens vary but mine took about 15 seconds for two tablespoons.  Add the coconut spread to the lime juice and then add the paprika, salt, pepper, and olive oil.  Coat wings in the coconut lime mixture, dust with flour, then dip again in the coconut lime mixture.  Place coated wings on a cookie sheet and bake for 40-45 minutes.

Hope you enjoy this new twist on an old favorite!